AudiovOx: The new album by Mic Bles brings a refreshing take on the authentic Boom-bap sound that we’ve all grown to love. The album is reminiscent of a Golden Era Hip Hop classic, which features a few Hip-Hop vets such as RasKass, El Da Sensei (Artifacts), Pacewon & Dj Romes and MED plus gritty and smooth production combined with classic samples and cuts throughout.

The Lead single “Pay Homage”,featuring the legendary lyricist Ras kass leads the way & sets the tone for the album. Ras always delivers stellar bars but Mic Bles brings his “A” game as well as both Mc’s show their love & respect for the pioneers that paved the way for the culture we love! The best part of hearing the album is that’s its 100% authentic quality hip hop. Mic is true to the music, the culture and most importantly himself.

With many different routes to take when adapting a musical tone in hip-hop, it’s often refreshing to take things back to basics. AudiovOx brings back solid substance focusing on tight lyricism on hard hitting production.

Hip Hop is all too encompassing and too massive a culture to be pigeonholed to a singular sound, but if there was ever a definitive sound for the genre then dammit this is it!! 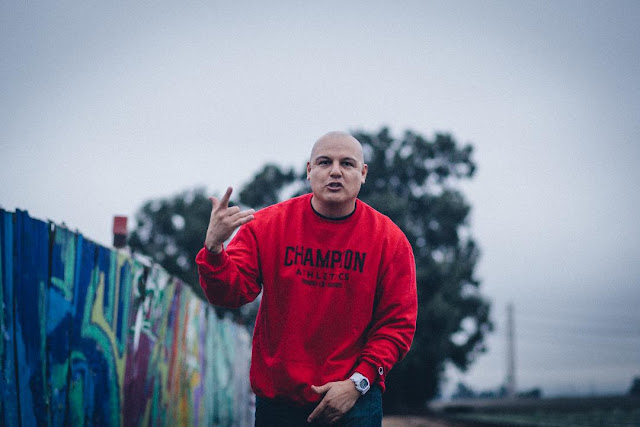 Born and raised in the streets of Oxnard, CA. Mic Bles became fascinated with the hip hop culture at an early age after watching break dancers and graffiti artist all over southern CA. Raised in the late 80’s/ early 90’s also known as “The “Golden Era” of hip hop Bles drew his influence and inspiration from prolific rappers and battle freestylers alike. Bles began to hone in his freestyling skills, rapping over mixtape instrumentals with childhood friends, freestyling at house parties and street corners anywhere they could draw even the smallest of audiences. Bles would soon became a part of a young budding hip hop community in the 805 area code. Doing anything they could to stay connected to the hip hop scene, even going as far as sneaking into back stages with some of the emerging artist at the time such as Lootpack, Red Zone Fam, and Earthquake Institute to name a few.
–
Tough situations in his early life and the opportunity to uproot and start new, prompted Mic Bles to leave sunny California and move to the east coast via Norfolk, VA. While in VA Bles made the decision to take his craft of freestyling and writing lyrics more serious and became a full blown emcee. During his time there Bles would be influenced by some of the east coast style of hip hop culture and blended it with his west coast roots to fully realize the rapper known as Mic Bles.
–
When Mic Bles finally returned to his home in Oxanrd California he had a new hunger to become one of the best rappers in the scene. Once back on the 805 hip hop scene Bles reconnected with childhood friend and producer/director Hustle 1. Hustle and Bles together co founded Jus Da Ill Music in Oxnard. Joining forces helped both Mic Bles and Hustle1 truly put a stamp on the independent hip hop scene. As a team Jus Da Ill Music released a slew of videos, mixtapes and full length albums all catering to the street hip hop culture together making them buzz worthy in the underground hip hop scene internationally. Soon there after they recruited DjGreenleaf and began to build the type of reputation which is respected and recognized by not only fans worldwide but other industry professionals.
–
Mic Bles and Jus Da Ill Music have been featured coast to coast as well as regional shows such Latin Lockdown tour 2012 held in CA, ID, NV, Mexico and TX. They have also toured around Europe and parts of Asia. With the edition of DJ Greenleaf as the backbone of the live show Bles has also performed along side such greats as KRS-ONE, Guru of Gangstarr to Dialated Peoples, RasKass and Inspecta Deck respectively. Just to name a few.
–
Mic Bles has become a lyrical powerhouse and a staple in the underground music scene and is steady in his pursuit at becoming a legendary emcee.
–
For Booking/ interviews/ or information Call: DCTWENTYONE MNGMT PH# (805)304-1774 MICBLES@YAHOO.COM
Please share

Chief Reckah ‘So You Know’ (Support me)

Labeled Minority – The End Is Just The Beginning

'Fallen' is the latest single by Chief Reckah, produced by Juxx Diamondz. says:
[…] Chief Reckah – The World We Live In (Official video)...